The tale of our visit to Truist Park doesn't begin where you may think - the ballpark. It begins in what we kept referring to as The Muppets Museum. We read that it was the largest Jim Henson collection in the world. We knew we had to be at the ballpark earlier than normal because we had tickets for the guided tour, so we bought tickets to the earliest possible entry time and brought anything we would need for the ballpark because wanted to maximize our time at The Muppets Museum. We would head straight to the park from the museum.

Truthfully, we were worried that we wouldn't get to see all that the museum had to offer. It gave us great anxiety to think that we would miss a Muppet or two.

It's actually not The Muppets Museum. It turns out that it's really the Center for Puppetry Arts. So, that was awkward. We discovered this when we tried to enter "Muppets Museum" into the Uber destination field.

Also, it's a very small museum. Even if you're super into puppetry, it would not take you very long to finish seeing everything this museum has to offer.

Lastly, it was not an entire building dedicated to Jim Henson. We honestly didn't realize that puppets were a thing. We just thought they were all Muppets.

It took us approximately 30 minutes to do the entire museum. 20 of those minutes were spent in the Jim Henson exhibit. Taking photos. Of. Every. single. Muppet. 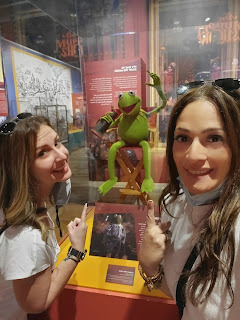 Since it was still so early, we returned to our fancy ass hotel and took a nap.

THEN we headed to the ballpark for the guided tour. The area around Truist Park is called The Battery and is similar to the area surrounding Wrigley or Fenway, only fancier. There are bars and restaurants, shops, a movie theater, a fancy hotel, and luxury apartments. After the tour, we still had some time to kill before the gates opened, so we stopped at The Tavern and had a beer.

It was the Braves' last homestand before the playoffs and free giveaway night. Plus, they were facing the Phillies, who were also jockeying for playoff position. The lines to get in were long, but nothing compared to what we deal with here in New York for a meaningless game. It went by pretty fast, but having said that, ladies, do not bring your bags to this ballpark!!!! Security would not allow bags larger than 5x9 through security. It could be just for the 2021 season due to COVID regulations, but we're not totally sure. 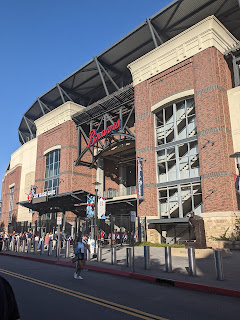 We did a full walk around of the main level before deciding to split a steak sandwich from The Carvery (the food options here are more plentiful than at Turner). 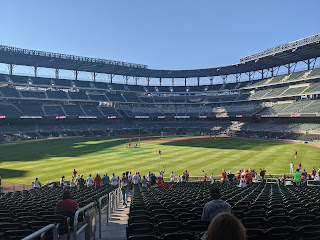 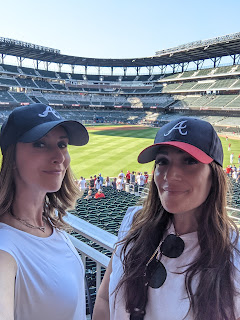 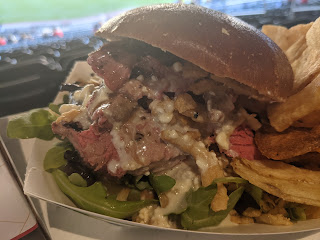 The sandwich is supposedly, "the best darn sandwich in baseball" and cost $23. It consisted of sliced tenderloin on a brioche bun with balsamic glazed arugula, roasted portobello, crunchy fried onion, and creamy bleu cheese sauce. It was served with a side of home made truffle chips. It was delicious, but A LOT of food. If you're planning on chowing down on multiple items at the game, we recommend splitting it like we did. And we're pigs. So, we're experts.

After stuffing our faces, we headed up to our seats and staged a photo shoot with our Brian McCann bobblehead: 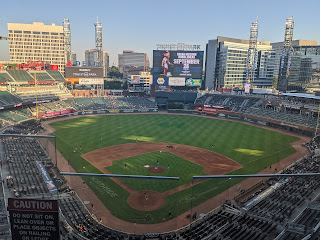 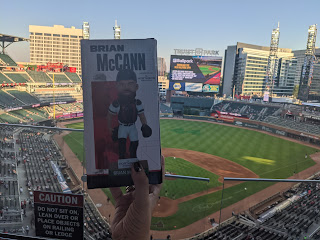 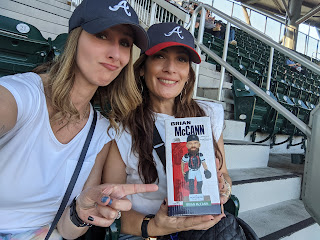 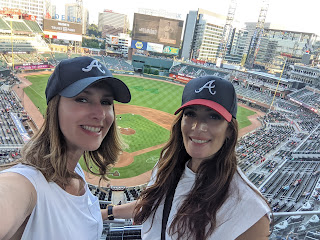 Since it was his special day and this is the south, here is Brian McCann in a monster truck: 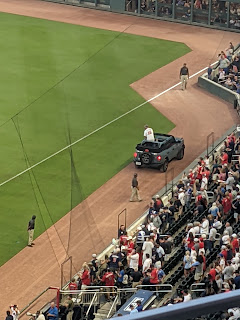 This is the closest we got to the team mascot, Blooper: 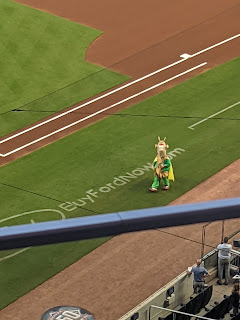 This ballpark has a lot of stuff going on during the game. For starters, they love fireworks. Every strikeout earns a firework. Possibly a homerun. We can't remember though because this game did take place 4 months ago and we can't remember what we did yesterday.  Could we Google this? Yes. But so can you. 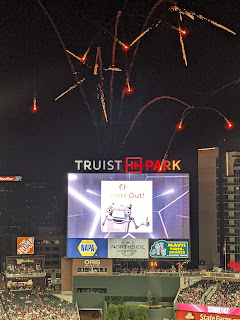 There's also a Home Depot Tool Race. We're not calling it that to be judgmental. They're literal tools. And they called it a Tool Race. Not us.

The tomahawk isn't as large as it once was, but it still exists and it still does the chop. From what we hear, the Braves will never, ever abandon it because they are not the Washington Football Club.

Charlie Morton pitched for the Braves and as always, he was a beast, but it was a low scoring game. It did get a bit hairy in the 9th, but they managed to hold off the Phillies with 2-1 victory. We had lovely time booing Bryce Harper. In fact, considering the Braves are not our team of choice, we felt that our boos were the loudest. It's like people outside of New York do not know how to rag on sh*thead players.

Except maybe Philadelphia fans. This was payback for the ice cube incident!

Before the game was over, we had to get our traditional ice cream in a helmet. Obviously. 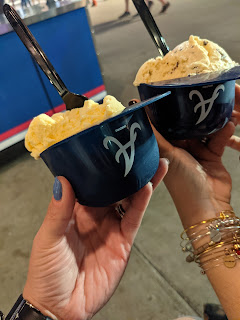 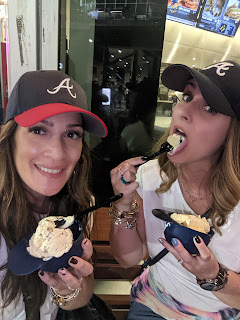 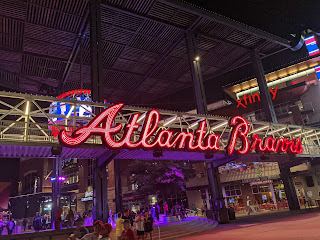 The following morning we returned to New York, so this is all we have to report on Atlanta. See you in March. Possibly.