We decided to share with you our 2011 wish list last week and it was met with some appreciation and some skepticism. 6 of you voted that our wish list seemed perfectly reasonable while 2 naysayers felt that we were really delusional and therefore slightly terrifying. Okay, so maybe asking Chris Cornell to leave his wife for Serena was a little ridiculous, but would you really say that we’re “terrifying?”

We felt that it was time. Time to once and for all squash the furry mass that is known as Jayson Werth’s beard. The most recent photograph that we’d been able to find of Jayson was taken at his introduction to the Nationals press conference, which we present to you here. 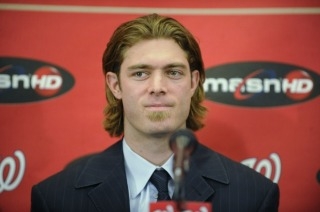 Under no circumstances should you think that this “look” is okay. It’s a vast improvement than what he is capable of, but it’s certainly not okay. 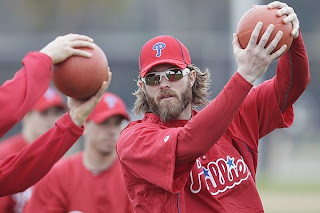 Since he’s known for regularly committing offenses such as the beard appearing above, we felt that it was time to write a letter to Jayson. *WARNING* This letter has explicit content that may not appropriate for children under the age of 16.

Dear Jayson,
Skipping the pleasantries, let us start by saying that you are technically an attractive species of male. Unfortunately, you make awful, awful, decisions when comes to your grooming habits.

First off, why? Why must you allow your beard to take over your otherwise charming face? Since the Phillies lost to the Giants in the NLCS, it’s clearly been established that your beard does not have magical powers. Hogwarts does not reside in it. Even when you harness the growth of the aforementioned monstrosity, you sport the Chin Brazilian. This is perplexing. Do you realize that this strip makes your face look like a vagina? Is that the goal you had in mind? If so, then we retract our complaint because you’ve succeeded in your endeavor. Everyone should be applauded for accomplishing their goals.

Second of all, why? We just can’t figure you out. We want access to that region inside your brain that controls the decision making skills regarding razor use. We know that you own a razor because you went from looking like the missing link to a groomed vagina. Clearly you or someone you know took care of that situation and they most likely used a razor…though they might’ve begun the process with hedge clippers.

Listen. We’re not opposed to facial hair. Some of the world’s sexiest men currently have or have had some hot ass facial hair. Examples, you ask? Barry Zito is a borderline champion at sexy facial hair. 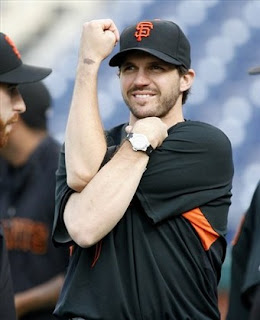 Brian Austin Green post-90210 in the Sarah Connor Chronicles. Don’t you just want to rub up against that?? Okay, maybe YOU don’t, but we bet your wife does. 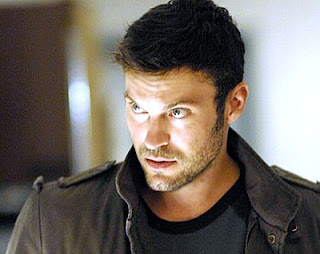 Gerard Butler is not only an effective and inspirational Spartan king, but he is also as delicious as baklava! Don’t you want to be our Super Hero of the Week like him? Just conjuring his image in one’s head can make a girl’s legs open! 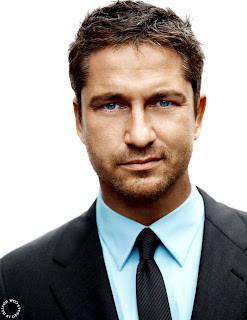 Why do you insist on being the kind of man that makes our thighs clench together? Don’t you want to be the new sex symbol of the MLB? Aren’t you tired of the Derek Jeters and David Wrights getting all of that bootay? We’re confident that you have it in you to overthrow their regime. Now…you may retort that you are happily married and that is extremely commendable because that will make you the only faithful husband in the MLB. But be honest. You still want that sex symbol status. We’ll have you know that no woman (or man) is going to do naughty things to your image with a grizzly bear sitting on your face!

Jayson, we’re just trying to help you because we care…especially now that you’re no longer a member of the Phillies. We’re not doing this to hurt your feelings. That’s the last thing we want to do because we care. We know that you’re capable of rocking the hot face scruff. We’ve seen it before (not very often admittedly) and it looks good. Why don’t you stick to that look?

We propose that if your beard should stray again that you allow us to shave your face free of charge (we will accept tips though)…just let us film it for the blog. Being that Serena is 28 and rapidly closing in on 29 and Lisa is 32, we’ve got plenty of experience in shaving our legs. Therefore, we’re pretty sure that we’ve got the hang of the whole razor and shaving cream thing. How different could shaving your face be from our legs? C’mon. We’ve got a larger surface area to take care of than you do. If you’re still uncertain, perhaps we can couple your face purging with Fred K’s Cancer somehow so that you feel that you’re giving back to the community and becoming sexy at the same time. What do you think? Let us know.

Hope to hear from you soon. Say hi to Ryan (Zimmerman) for us. Do try not to get lost in DC because one wrong turn and you can suddenly find yourself on the steps of a dilapidated shanty where an old man missing his teeth is selling crabs out of a tin garbage can.

We don’t have much in terms of baseball notes this week. It seems that baseball land is experiencing the quiet before the storm as players gear up to report for spring training. Vlad Guerrero and the Orioles have agreed to a 1 year/$8 million deal. We can’t foresee this hurting the Orioles as Vlad has always proven to be a pretty reliable offensive power and given his age, signing him for only a year definitely makes sense. Across the country, the Rangers secured Josh Hamilton for at least another 2 years with a $24 million contract.

Yankees pitching coach Larry Rothschild seems to be pretty confident in AJ Burnett. He claims that Burnett is healthy both mentally and physically heading into spring training. Oh, well thank goodness. However, we really didn’t think that he had been physically ailing when he drove almost every game he pitched into the dumpster. Keeping up the positive outlook here, Rothschild believes that Burnett is “coming in with the right intention in mind and that’s a good place to start.” Great. Wonderful. While we absolutely agree that a positive mental outlook is a major factor when it comes to success in athletics (or in any endeavor that you choose to participate in), the “right intention” only gets you so far. We have the best intentions most of the time and it doesn’t always guarantee that the sh*t won’t hit the fan. We’re sure that Burnett did not INTEND to blow so many ball games and therefore hike up his season ERA, but it happened nonetheless. Burnett reports to spring training on Monday and Rothschild’s goal is to work with Burnett on his mechanics to get him straight again. Please, please let Rothschild be some sort of miracle worker.

Michael Jackson’s going to bring it on home for us today: “Sometimes, you’re hairy. A hairy fright and someone’s got to shave you and the TBB are just right.”
Posted by Traveling Baseball Babes at 2:50 PM